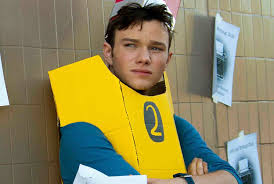 “After being struck and killed by lightning, a young man recounts the way he blackmailed his fellow classmates into contributing to his literary magazine.”

When I moved back to Los Angeles last year, I had the good fortune to assist costume designer Wendy Chuck on little independant film called “Struck by Lightning”. The screenplay is the brainchild of cutie pie Chris Colfer of “Glee” fame who wrote and stared in the film.

Struck was just shown at the TriBeCa film festal and received rave reviews. It is a good little movie with a great message, if you have the opportunity to see it I urge you to!

From my experience with Struck, so many doors have opened for me and my new film LA family has been born.